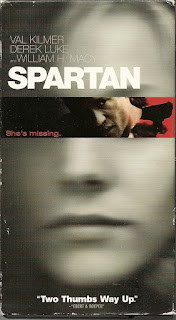 Synopsis: It’s basically 107 minutes of Val Kilmer yelling “where’s the girl?!” before he smashes somebody’s head through a plate-glass window.

Blurb From the VHS Jacket: “FBI. CIA. Secret Service. Black Ops. Robert Scott is all of these. And none of these. His newest assignment: find the possibly kidnapped daughter of a high government official before the story leaks.”

What Did I Learn?: 1) Never lie to a ranger. 2) The hardest thing isn’t going through the door, it’s coming out. 3) You don’t fake the DNA. You issue a press release. 4) In the city, always a reflection. In the woods, always a sound. 5) You don’t want to go in the desert. 6) People usually fuck up when they try to help.

You Might Like This Movie If: You figure it must be a documentary about crunchy, aromatic apples.


Really?: 1) Wait a minute... the President’s daughter is kidnapped by drug dealers/human smugglers, and his advisors call off the rescue mission because he’ll get a bounce in the polls, and they assume the bad guys will quietly kill her? Why couldn’t they simply sell the girl to a terrorist group to make propaganda films? 2) This movie is awfully similar to that Liam Neeson flick, Taken. 3) Come to think of it, Scott’s (Val Kilmer) dialogue sounds an awful lot like De Niro’s in Ronin, which was also written by David Mamet.

Rating: Spartan is a compelling, edge-of-your-seat action thriller that starts losing its credibility somewhere in the second act. Still, it’s great for an evening’s entertainment. 8/10 stars.