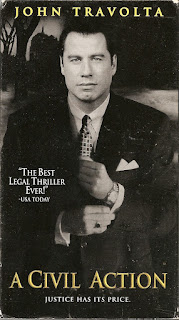 Blurb From the VHS Jacket: “John Travolta (Face/Off, Phenomenon), gives another brilliant performance in a suspenseful true story that’s been praised as the greatest legal thriller of all time!”

What Did I Learn?: 1) The odds of a plaintiff's lawyer winning in civil court are two to one against. 2) A dead plaintiff is rarely worth as much as a living, severely-maimed plaintiff. 3) There is absolutely no place in a courtroom for pride.

You Might Like This Movie If: You're in the mood to watch some legal incompetence.
Really?: See: “Synopsis.” Seriously, Schlichtmann (Travolta) states pretty clearly that the entire point of going to court is to arrive at a settlement before the legal bills start adding up, yet we’re supposed to believe that he throws his judgement completely out the window in order to achieve justice for the pollution victims, even after he’s offered a $20 million deal? Or that nobody else at the firm would stop his reckless behaviour?

Rating: A Civil Action is a slow-moving, but highly compelling courtroom drama with an amazing cast, and a stellar performance from Robert Duvall. That said, it’s a bit of a downer, and I had bit of trouble believing a cynical, flashy legal shark like Jan Schlichtmann would fuck up as badly as he does. 8/10 stars.