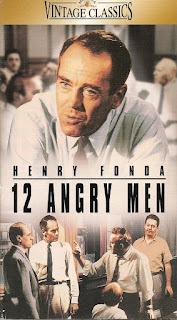 Let’s Get Legal Movie #5 (No, I’m not starting a Jack Warden film fest, even though he starred in this, and in And Justice For All)

Blurb From the VHS Jacket: "Eleven jurors are convinced that the defendant is guilty of murder. The twelfth has no doubt of his innocence. How can this one man steer the others toward the same conclusion?”

What Did I Learn?: 1) You can twist facts any way you like. 2) Rooting for the Baltimore Orioles is “like being hit in the head with a crowbar once a day.”

You Might Like This Movie If: You really want to see Jack Klugman spar with a fellow juror who is obsessed with following proper procedures.
Really?: 1) So, wait....there are twelve men seated at a table, and nobody addresses anyone else using proper names? Wouldn’t that get confusing in real life? 2) I had a hard time believing the hard-core “guilty” holdouts would silence the bigot (Juror #10, played by Ed Begley), and essentially refuse his support. 3) Um.... was Juror #8 (Henry Fonda) allowed to nip out of his hotel room to buy an identical switchblade? Were the other jurors allowed to discuss it, afterwards?

Rating: Based upon a teleplay by Reginald Rose, 12 Angry Men is a little stagey for my taste (see: “Really?”), but it’s also a powerful look at the criminal justice system, and a reminder of how easy it can be for ordinary citizens to rush to judgement when they don’t have all the facts. Fonda delivers one of the best performances of his career, and his scenes with Lee J. Cobb are explosive and memorable. 8/10 stars.