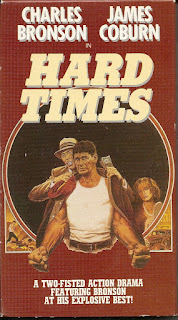 Blurb From the VHS Jacket: “Charles Bronson demonstrates exactly what tough is in this two-fisted action drama about a drifter suddenly caught up in the fight game during the great depression.”

What Did I Learn?: 1) Some are born to fail, others have it thrust upon them. 2) The next best thing to playing and winning is playing and losing. 3) Every town has somebody who thinks he’s as tough as a nickel steak.

You Might Like This Movie If: You want to learn about hard times.
Really?: Hmm...for a pragmatic, smooth-talking fight fixer, Speed (James Coburn) isn’t very good at maintaining his relationships, is he?

Rating: Written and directed by Walter Hill (one of my favourites), Hard Times is a fun (and unfairly forgotten) film that’s reminiscent of The Sting. Coburn and Bronson portray flawed, but sympathetic characters, and share some great moments. My only complaint would be that that Hard Times tends to drag in places. Highly recommended. 9/10 stars.