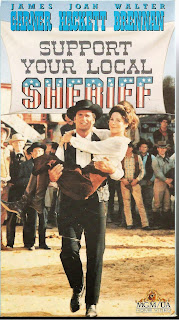 Synopsis: Imagine Rio Bravo, done in the style of McLintock!, yet without the Duke.

Blurb From the VHS Jacket: “Toting a wry sense of humor and a straight-shooting iron, James Garner recalls his popular Maverick TV character in this rollicking Western spoof – and charmingly demonstrates why he is the screen’s finest practitioner of the art of amiable nonsense.”

What Did I Learn?: Any film that repeats the same bad pun (“Madame Orr’s House”) over and over again probably needs a re-write.

You Might Like This Movie If: You want to see James Garner's innovative problem-solving skills in action.


Really?: Support Your Local Sheriff is a screwball comedy-western, so it might be a little unfair to judge it in terms of its credibility. Maybe I could overlook Garner holding Bruce Dern prisoner in a jail with no bars, but if the Danbys really wanted Garner dead, here’s an idea: wait until dark and then shoot him in the back.

Rating: While it’s fun to watch Garner trade lines with Walter Brennan and Jack Elam, Support Your Local Sheriff is a mediocre blend of western and 1960s camp that often feels more like an overly-long, goofy sitcom. The film has some funny moments, but it’s otherwise pretty forgettable. 6/10 stars.