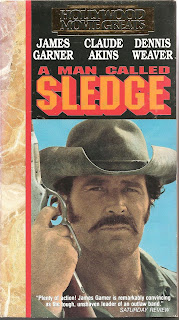 Synopsis: Ever wanted to see Hollywood’s most likeable star basically play a really cold-blooded version of Clint Eastwood in those spaghetti westerns? If so, this is totally your movie...

Blurb From the VHS Jacket: “Two western rogues Mallory and Sledge (James Garner), set out to steal gold, but local gunslingers kill Mallory while Sledge is preoccupied with his woman.”

What Did I Learn?: Hate has no place in a card game... but that shouldn’t prevent you from leaving your buddies broke, angry, and desperate enough to gun you down.

Really?: 1) So let’s see – Sledge’s entire plan is based upon the prison officials not conducting a thorough search of his person? That’s awfully weak. 2a)Wait – Sledge and his buddies just destroyed a prison, killed the local sheriff, and made off with a fortune in gold. Does it really make a lot of sense to stop, and play some (literally) cut-throat poker? 2b) And while we’re on the subject of this plot-turning poker game... why in the world would Sledge bankrupt his accomplices, considering it would give them a motive to kill him? 3) Take a drink every time that awful Phil Coulter song “Other Men’s Gold” comes on.

Rating: Leaving aside the obvious miscasting of James Garner in the role of Luther Sledge (see: “Synopsis”), A Man Called Sledge is an exciting western-caper film that starts out well, but then collapses in the third act after Dennis Weaver’s character is killed and the plot stops making sense (see: “What Did I Learn?” and “Really?”). Check it out if you’re into spaghetti westerns, but it’s not a great film. 6/10 stars.