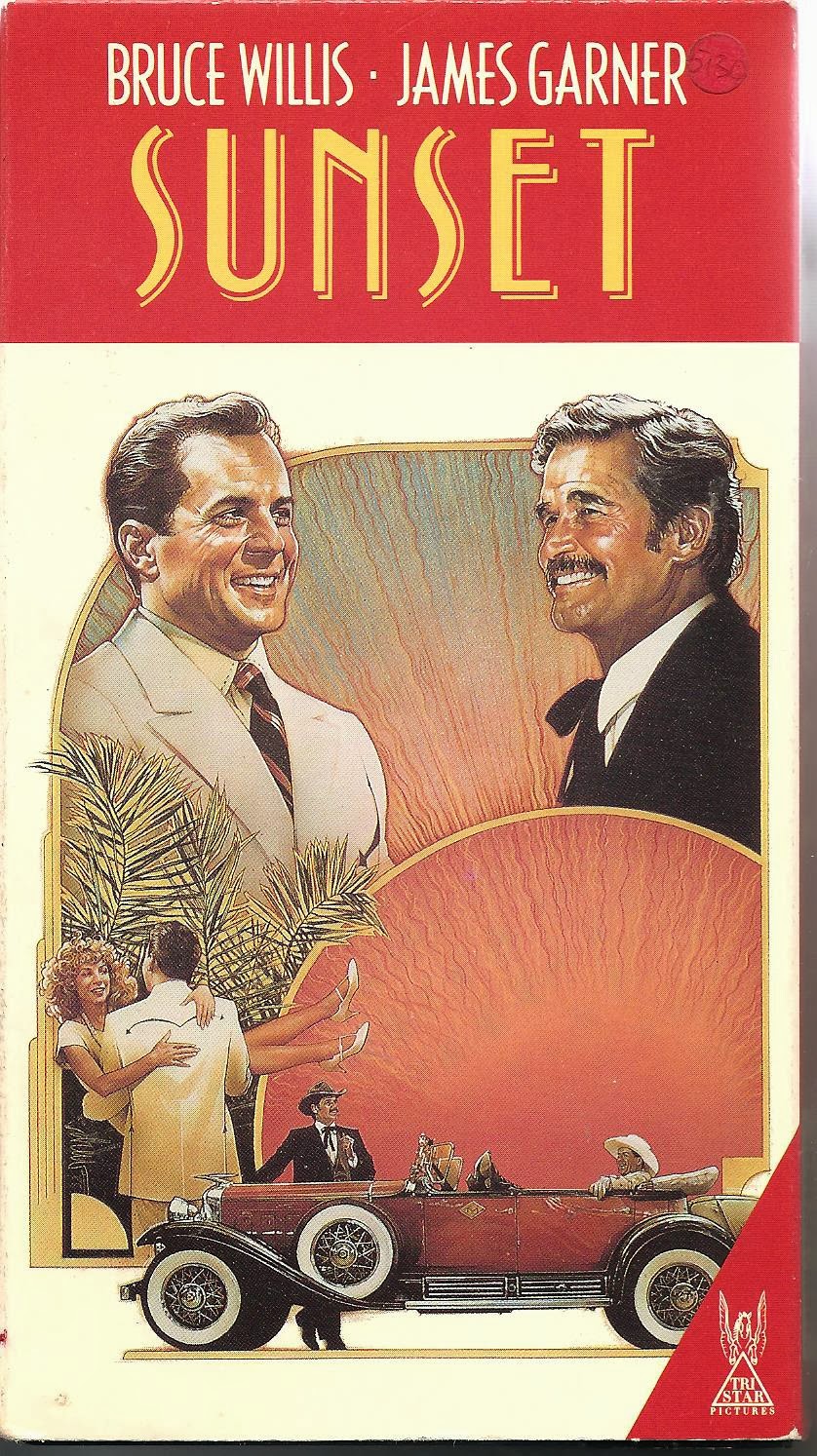 Not Quite a James Garner Western... (Still, this would have been perfect for my tribute to Wyatt Earp movies in September, 2012).

Synopsis:  There’s been a murder in Hollywood... but don’t worry – an octogenarian ex-lawman and a self-absorbed movie actor are on the case!

Blurb From the VHS Jacket: “Bruce Willis and James Garner are out to make a movie and solve a murder in a Blake Edwards film, SUNSET – the fictional adventures of America’s greatest real-life heroes.”

What Did I Learn?: Apparently, when Wyatt Earp didn't have a gun handy, he liked to hit his opponents in the nuts.

You Might Like This Movie If: You really want to see James Garner shoot somebody.
Really?: 1) So... Cheryl (Mariel Hemingway) wears a tuxedo in order to give brothel patrons she’s not interested in men, and yet Wyatt takes an instant shine to her upon their first meeting. Yeah... that was a great disguise. 2) Let me see... Tom Mix (Willis) and Earp (Garner) both work for Alperin. Couldn’t he simply fire them? 3) I was expecting some sort of tension between Mix and Earp, but aside from a jokey confrontation about one out-threatening the other, they get along like two peas in a pod. Oh, and they both speak almost entirely in clever quips. 4) Hmm... so, Victoria is beaten so badly she isn’t expected to survive the night, yet she’s capable of carrying on an articulate conversation with Mix and Earp at just the right time? 5) Wait – how the fuck does Wyatt Earp appear on the scene near the end to save Mix’s life? Mix and Alperin had a huge head start in driving to the docks, and would Earp even know where to go, or how to get there?

Rating: Sunset isn’t really a western so much as Blake Edwards’ attempt to make a film noir-style detective movie set in 1929. The film has a certain charm, and it’s interesting to watch Garner work with a pre-Die Hard Bruce Willis, but it’s weakened by far too many plot twists, a lack of tension between the leads, and the dialogue often sounds “written” and phony (see “Really”). Oh, but I’m giving Sunset an extra star for Malcolm McDowell’s outstanding performance (which includes a mime routine!) as the villain. 7/10 stars.