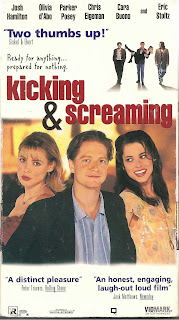 Please click the links to read my review of two similar films, Singles and Reality Bites.

Blurb From the VHS Jacket: “Kicking and Screaming features an all-star cast in an original new comedy about four young men going through a mid-life crisis in their 20’s.”

What Did I Learn?: If you’re running a pub, it’s a very bad idea to place a dart board right next to the front door.

Really?: 1) Holy shit, these guys are all supposed to be 22 years old, more-or-less unemployed, and fresh out of university, and yet they all wander around campus wearing dress pants and tweed jackets? 2) Considering Otis is an engineer, I would imagine that he took an entirely different set of courses than the other characters (and engineers tend to stick together in university) I’m not sure why he would become friends with these guys. 3) It’s nice that Chet has spent the last ten years as a bartender/professional student. I have to wonder, though – how does he afford the tuition? 4) So, none of these idiots have any desire to travel, enter the workforce, or even work out at the gym?

Rating: There’s a revealing moment in Kicking and Screaming when a minor character remarks that the four main characters all talk, and sound the same. I wanted to like this movie more than I did – it’s an intelligent, independently-made, character-driven first work by Noah Baumbach, but it has a couple of problems: as a comedy, it’s not terribly funny, and I couldn’t help myself from thinking that Grover, Otis, Max and Skippy are just slight variations of Baumbach himself (see: “Really?”), and they’re all too snooty, pretentious and self-absorbed to be likeable. There’s a lot of good stuff in this movie, including nice performances from Parker Posey and Eric Stoltz, but the script should have been polished, first. 7/10 stars.