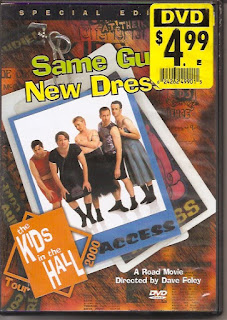 Synopsis: Once-edgy comedians come back for another cross-dressing, head-crushing, eeeevil North American tour.
Blurb From the DVD Jacket: "Same Guys New Dresses records the action on and off the stage as the five original Kids In the Hall embark on a high pressure North American in an attempt to rebond as a performing group six years after the run of their successful TV series and rebound from the experience of Brain Candy, their one feature film."
What Did I Learn?: 1) Based upon his obsession with including a robot dog in the Buddy Cole routine, and his bizarre decision to cancel an appearance on the Conan O’Brien Show at the last minute, I’d say Scott Thompson is a bit of a flake. 1b) Robot dogs aren’t funny.
You Might Like This Movie If: You know it's tough to go on tour and attempt to regain your former glory.
Really?: 1) Funny how the footage focuses almost entirely on Thompson, Dave Foley, and Kevin McDonald. Was Bruce McCulloch less-than-enthused about making a documentary?  2) Why in the world would Foley schedule laser eye surgery for the day of a performance?
Rating: As a long-time Kids in the Hall fan, I was a little disappointed with Same Guys, New Dresses for the simple reason that it seems confused; we see bits and pieces of the team’s stage show, as well as a few of their backstage interactions, but there are far too many “the making of…” scenes of the Kids learning choreography or trying on makeup (and all taking at the same time!) for my taste, and the audience isn’t given that much insight into their interpersonal dynamics. 6/10 stars