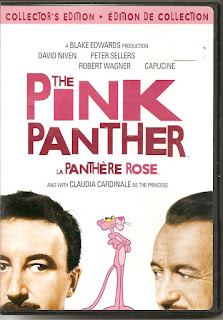 Synopsis: It's a Pink Panther flick, except Clouseau is just a supporting character, he never mispronounces anything, Dreyfus and Cato are nowhere to be found, and um... it sure doesn't seem like a Pink Panther movie at all!


You Might Like This Movie If: You really want to watch the film that led to a TV ad for home insulation.


Really?: 1) Funny how Dala's (Claudia Cardinale) accent sounds pretty Italian for a Middle Eastern princess. (It's especially strange considering Cardinale's dialogue was dubbed over by Gale Garnett). 2) Hmm.... I can understand George (Robert Wagner) wanting to follow in his uncle's footsteps and pinch the Pink Panther diamond himself (although that in itself is quite a coincidence), but after he discovers the Phantom's true identity? Talk about ungrateful.


Rating: If you're a fan of the later films and you really want to see Peter Sellars destroy a drawing room, the original Pink Panther might be a bit of a let-down (see: "Synopsis"). Personally, though, I think it might be the best in the franchise, as a little bit of Clouseau goes a long way. The 1963 Pink Panther is both funny and clever, and it's a pleasure to watch Niven - the lead - match wits with his co-stars. Oh, and watch for Fran Jeffries in a sexy and memorable song-and-dance number. 8/10 stars.