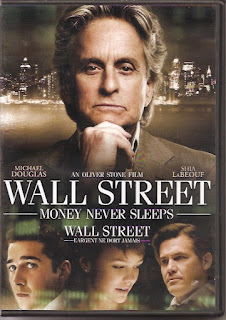 Please click the link to read my review of Wall Street.
Synopsis: Disgraced 1980s high-roller teaches yet another young and idealistic-but-ambitious financial puke what greed is really all about.
Blurb From the VHS Jacket: “Following a lengthy prison term, Gordon Gekko (Michael Douglas) finds himself on the outside looking at a world he once commanded.”
What Did I Learn?: 1) Money is a bitch that never sleeps. 2) Time, not money is the prime asset in life. 3) Bulls and bears both make money, while pigs get slaughtered. 4) The mother of all evil is speculation. 5) It’s not about money. It’s about the game between people. 6) Every thief has an excuse. 7) Idealism kills every deal.
You Might Like This Movie If: You're intrigued by the idea of dabbling in the world of high finance and free money.
Really?: 1) So, Bud Fox (Charlie Sheen) has essentially become Charlie from Two and a Half Men? Gee, and I thought he learned a few things about humility and the dignity of work at the end of the original movie. That’s a pretty awful cameo. 2a) I have to wonder: what is Jake’s primary motivation? Is it ambition? Is it revenge for the death of Louis Zabel (Frank Langella)? Is it green energy? Is it developing a relationship with Winnie Gekko? It seems to change every few minutes. 2b) Hmm… Jake wants revenge, so he goes to work for Bretton James (Josh Brolin), and then quits when the dude refuses to invest in his big green energy project? 3) Was there a point to the motorcycle race, or did Oliver Stone think it might look good in the trailer?
Rating: While I always wondered whatever happened to Gordon Gekko and Bud Fox after the end of the 1987 classic, I kind of wish Stone hadn’t made this sequel. Wall Street Money Never Sleeps isn’t a terrible film, but it’s overly long, the script is confused, meandering, and dependent upon far too many plot points, Brolin’s character is woefully underused and underdeveloped, and the ending is treacly and unconvincing. Still, it was nice to see Michael Douglas back in his most famous role. 6.5/10 stars.