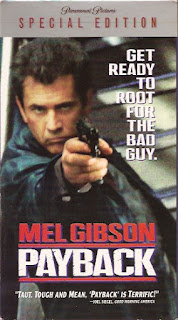 Damn - this would have been PERFECT for my tribute to Revenge-themed movies.
Synopsis: Criminal with questionable judgement pretty much wipes out the Chicago mob over a relatively trivial amount of cash.
Blurb From the VHS Jacket: “The dynamic superstar portrays Porter, a career criminal bent on revenge after his partners in a street heist pump metal into him and take off with his $70,000 cut. Bad move, thugs.”
What Did I Learn?: 1) Nobody likes a monkey on his back. 2) Not many people know what their life is worth. 3) If you go high enough within a hierarchy, you always come to one man who makes the final decisions.
You Might Like This Movie If: You appreciate famous people AND revenge.
Really?: 1) So, how dumb are those crooked cops? I’d like to think that if I were a police officer and my badge went missing just after a professional thief happened to ‘bump’ into me, I would put two and two together. 2) Wasn’t the Chicago Outfit more-or-less created by Al Capone and other Italian-American gangsters in the 1920s? Would it really be run by guys named Carter, Bronson and Fairfax? 3) So, the Chinese gangsters fire several machine guns at point-blank range into the sedan carrying Porter, and he emerges without a scratch? 4) Ok, I have to ask - how did Porter receive medical treatment after Val (Gregg Henry) and Porter’s wife double-crossed him? This is never explained. 5) Could Val credibly carry on a relationship with Pearl (Lucy Liu), even though she’s closely connected to a rival crime faction? That might explain how he got the tipoff that led to the initial robbery, but wouldn’t both the Outfit and the Chows be suspicious of both of them?
Rating: Payback is an exciting, and highly-enjoyable action thriller that features Mel Gibson as a highly-determined, violent, and somewhat amoral protagonist (the film was marketed with the catchline: “get ready to root for the bad guy). Overall, it works as long as you don’t take it too seriously. (Please note: there’s also a Director’s Cut that’s apparently quite different in places from the Theatrical Release. I’ll have to check it out one of these days.). 8/10 stars.