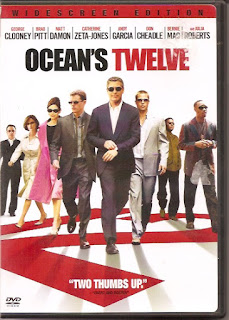 Please click the link to read my review of Ocean's Eleven.
Synopsis: George Clooney stars in a lacklustre sequel to a ho-hum remake of a Rat Pack classic.
Blurb From the DVD Jacket: “They’re back. And then some. Twelve is the new eleven when Danny Ocean and his pals return in a sequel to the cool caper that saw them pull of a $160 million heist.”
What Did I Learn?: 1) Nothing costs nothing. 2) Julia Roberts wasn’t in Four Weddings and a Funeral, and she occasionally hangs out with Bruce Willis in her free time.
You Might Like This Movie If: you've always wanted to own a Faberge egg.
Really?: 1) So, the movie ends with Terry Benedict (Andy Garcia) - the villain from Ocean’s Eleven, pocketing a cheque for $194 million, even though he was already paid by the casino’s insurance company? That’s a wee bit unsatisfying. 2) Funny how Benedict is able to individually track down every member of Ocean’s crew, and nobody has the good sense to pick up a telephone and warn the others that he’s coming. 3) How would Rusty or Linus’ mom know that Isabel (Catherine Zeta-Jones) forged those police documents?
Rating: I know what you're thinking - when I reviewed Ocean's Eleven back in January, 2012, I made the following declaration: "there is no way I'm going to sit through a certain piece of crap known as Ocean's Twelve. If you haven't seen this film, don't. Watching it, I had a funny feeling a whole bunch of Hollywood turds were given an all-expenses-paid trip to Europe in exchange for making a movie they knew would be horrible, but would also bring in a ton of money."
Ocean's Twelve isn't a great film by any stretch of the imagination, but it's not nearly as awful as I somehow remembered it to be (incidentally, I had a similar experience with another movie, Passed Away, back in 2012). Its biggest problem is that the story often seems meandering and directionless; instead of planning one big heist, Danny and his crew mostly drift across Europe and shoot the shit with each other as they work on three smaller jobs. Ocean's Twelve has a great cast, but the actors aren't given much to do, so by the end, I really didn't care. 5.5/10 stars.