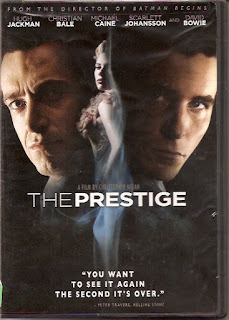 Synopsis: If you ever wanted to watch two Victorian-era illusionists behave like Bugs and Daffy yelling: “Duck Season!”, “Wabbit Season” for over two hours, this is definitely your movie.
Blurb From the VHS Jacket: “Award-winning actors Hugh Jackman, Christian Bale, Michael Caine and Scarlett Johnson star in The Prestige, the twisting, turning story that, like all great magic tricks, stays with you.”
What Did I Learn?: 1) Wow - who knew that zapping objects with a whole lot of electricity could both replicate and teleport those objects? 2) Thomas Edison was NOT a nice guy. 3) Every magic trick has three parts….blah, blah, blah…
You Might Like This Movie If: You're in the mood to see some top-quality magic tricks.
Really?: 1) See: “Really?” 2) So, Angier (Jackman) has a device that can teleport and duplicate objects, and his only motivation is to use it for a super-duper magic show? 3) Wait, just how long does Angier wait in Colorado to talk to Tesla? Two years? Three years? Ok, I realize he has oodles of money, and all the time in the world, but most people would have given up after a few weeks of waiting. 4) Wow…Borden (Bale) sends Angier to Tesla on a wild goose chase, and he actually finds the greatest invention in the history of mankind?
Rating: The Prestige is probably best known as the only non-Batman collaboration (to date) between Christian Bale and Christopher Nolan. It’s a highly entertaining movie with some fine  performances (I especially liked Caine as Cutter, and David Bowie as the reclusive Nikola Tesla), and it even shows us some behind-the-scenes secrets of the world of professional magicians. My only complaints are that it’s a bit too long (130 minutes), and both of the leading characters are pretty awful human beings. Highly recommended. 9/10 stars.