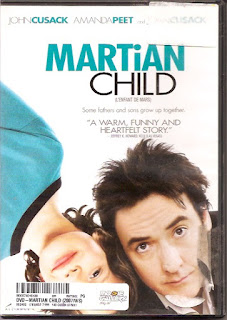 I could have included this in my tribute to John Cusack's movies in 2012.
Synopsis: It’s basically About a Boy meets K-Pax.
Blurb From the DVD Jacket: “John Cusack stars in this ‘inspirational and uplifting journey’ (Cynthia Wickenkamp, Star Entertainment) as a lonely science-fiction writer who adopts a boy who claims to be from Mars.”
What Did I Learn?: 1) Calling somebody an “old soul” means they have figured things out. 2) “That’s a good question” is something adults usually say when they don’t have an answer. 3) Hysterical is the new calm. 4) Baseball is the only game that allows you to suck 70% of the time and still be great. 5) There are no superstars - only supernovas and white dwarfs. 6) Apparently, children don't require discipline.
You Might Like This Movie If: You want to see a clever smart-alec converse with a curious Martian.
Really?: 1) David owns a very old dog. Take a wild guess what happens to the loveable pooch. 2) When Dennis visits a Mars exhibit at the local planetarium, he tells David that Mars is somehow different from what he remembers. Considering David is a science fiction writer and he wants to understand the lad, I cannot believe he wouldn’t ask what Dennis does remember about his past. 3) What sort of father would encourage his son to break all of the dishes in the kitchen, and then start a food fight? Gee…and then the grumpy dude from Social Services shows up immediately afterwards. I didn’t see that one coming… 4) So, why does Dennis have a self-imposed deadline for returning to Mars? I realize it adds some dramatic tension near the end of the movie, but it seems extremely contrived, and it’s never explained.
Rating: I wanted to like Martian Child a bit more than I did. The film is genuinely touching in places, and Cusack does a fine job of carrying the story with his likeable everyman shtick, but much of it struck me as cloying, manipulative, contrived, and predictable, and David's consequences-free parenting style rubbed me the wrong way on a few occasions (see: “Really?” and "What Did I Learn?'). Moreover, Martian Child’s occasional moments of comedy fall flat, and the budding romance between David and Harlee (Amanda Peet) is never developed, and feels tacked-on. 6/10 stars.