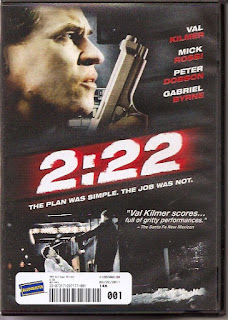 Synopsis: It’s a bit like a low-rent Ocean’s Eleven sandwiched between two slices of bad Cassavetes.
Blurb From the DVD Jacket: “Hardened criminal Gully Mercer (Mick Rossi) devises a foolproof plan for a snowy New Year’s Eve heist at 2:22 AM at the Grange, a high-class hotel filled with a vault of valuable safety deposit boxes.”
What Did I Learn?: 1) If you’re going to rip off a bag of cocaine, it’s not a good idea to sell it to anyone who might be connected to its rightful owners (oh wait - I think I learned that by watching Atlantic City). 2) Gabriel Byrne probably took the part of Detective Swain strictly for the cash, because he's uncredited, and he doesn't look all that enthusiastic about the role.
You Might Like This Movie If: You take certain number sequences VEEEEEEERY seriously.
Really?: 1) So, Val Kilmer gets top billing, and he’s in this movie for what - a couple of scenes equalling three or four minutes? 2) Ok, I have to ask: why is 2:22 in the morning the perfect time to rob the hotel? And why do it on New Year’s Eve, when lots and lots of people stay up late? This is never explained. 3) Holy coincidences, Batman! One of the robbers is identified by the drug dealer he beat up and robbed after a quick glance at a tattoo; later, the police detective (Byrne in another role he probably leaves off his resume) makes a series of arrests simply because he's standing in the right checkout line at the right time, and is able to identify his wife's wedding ring. 4) One of the hotel guests is an older, suicidal man who eventually pulls the trigger. The incident has absolutely no bearing on the plot.
Rating: Billed as a gritty action thriller that was filmed in Toronto, 2:22 seemed promising when I sat down for a viewing, but it never really delivers. The film works well only when the thieves are in the hotel (and it takes awhile before they make their move - see “Synopsis”) and there’s a tension in the air as they attempt to empty the boxes without tipping off the police or the hotel guests. Sadly, the heist ends far too soon, and the rest of 2:22 consists of rather gruesome violence between our heroes and a local gangster. A better script would have resulted in a much better movie. 5.5/10 stars.