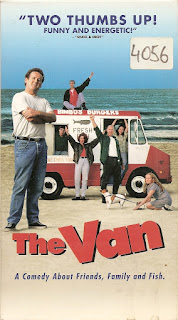 Happy St. Patrick's Day! Please click the links to read my reviews of the other two films that were based upon Roddy Doyle's Barrytown Trilogy: The Snapper, and The Commitments.


What Did I Learn?: 1) Apparently, it's quite easy to confuse a (clean) diaper with a slice of fish when you're standing over a deep-fryer. 2) Dublin's youth must be incredibly bored. Why else would they gleefully follow two men pushing a dilapidated food truck?


Really?: Larry and Bimbo's business is eventually shut down by a health inspector, but I had some difficulty believing they could set up a business so quickly without any state interference. For starters, I don't think you're allowed to tow an engine-less food truck around town, and I doubt they could simply park it on the street for long periods of time. And wouldn't they need a license to sell food?


Rating: The Van is the funniest film in the Barrytown trilogy, and for my money, it's also the best of the three. Colm Meany (Larry) and Donal O'Kelly (Bimbo) deliver outstanding performances as a couple of likable-but-flawed old buddies who wind up nearly killing each other when their fast-food venture takes off. If you're in the mood for something warm, relatable, and very Irish, The Van is a grand choice for St. Patrick's Day. 10/10 stars.