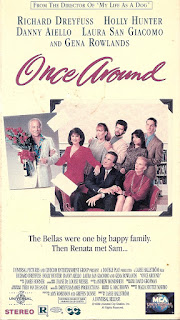 Synopsis: Ever wanted to watch Richard Dreyfuss annoy the crap out of a close-knit Italian-American family for nearly two hours? This is your lucky day!

Blurb From the VHS Jacket: “Richard Dreyfuss and Holly Hunter lead an all-star cast in this critically-acclaimed tale of life, love and chance.”

What Did I Learn?: If you know the words to a traditional Lithuanian folk song about motherhood, your best course of action is to keep it to yourself.

You Might Like This Movie If: You know it isn't easy to welcome an arrogant, but friendly stranger into your home.
Really?: 1) Ok, I realize Sam loves Renata so much that he moves his entire base of operations from New York to Massachusetts so she can be close to her family, but holy cow – don’t the two of them have any friends? Don’t they ever go to any work-related functions? Why does every single scene after the first 20 minutes or so revolve around Sam visiting the home of Renata’s parents (Danny Aiello and Gena Rowlands), and driving them batshit crazy? 2) “Fly Me to the Moon” is a lovely tune, but was it necessary to use it four times? I was pretty darned sick of it by the time the end credits started to roll.

Rating: I really wanted to like Once Around a bit more than I did. The movie features an all-star cast, a fine script, and characters who are both complex, and sympathetic. On paper, Once Around should be a great film, yet I continually cringed, and had trouble watching it because its setup consists of one awkward scene after another (see: “Really?”). 6.5/10 stars.