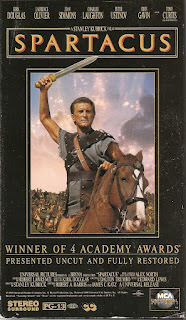 Synopsis: Gladiator learns the hard way that you don’t fuck with Rome.

Blurb From the VHS Jacket: “Director Stanley Kubrick tells the tale of Spartacus (Kirk Douglas), the bold gladiator slave and Virinia (Jean Simmons), the woman who believed in his cause.

What Did I Learn?: 1) Corpulence makes a man reasonable, pleasant and phlegmatic, and all of the nastiest tyrants are invariably thin. 2) When a free man dies, he loses the pleasure of life. A slave loses his pain. Death is the only freedom a slave knows.3) One of the disadvantages of being a Patrician is that occasionally you are obliged to act like one. 4) A good body with a dull brain is as cheap as life itself. 5) Rome is the mob. [These are all great lines, but wow – they all sound ‘written.' Would anyone really use any of them in an authentic conversation?]

You Might Like This Movie If: You enjoy heckling defenders of capitalism and imperialism.
Really?: 1) I realize Spartacus is based upon a true story, so maybe this is an unfair criticism, but why would Spartacus decide to march on Rome if he knows it’s a bad idea, and exactly what the Romans want him to do? The film suggests the slaves didn’t have any better options, but how about destroying one of the opposing Roman armies (rather than taking on three!), and then fortifying their position in the heel of Italy’s boot? Wouldn’t that have been a better decision? 2) Hold on just a minute.... Spartacus and Antoninus are told by their captors to fight to the death, and the victor’s prize is crucifixion? Why wouldn’t they simply stab each other so they could both die quickly? Or why wouldn’t Spartacus simply kill himself after stabbing his friend?

Rating: Directed by Stanley Kubrick (please click the links to read my reviews of Full Metal Jacket, A Clockwork Orange, Paths of Glory, and 2001: A Space Odyssey), Spartacus earned four Academy Awards, and it holds up well nearly 60 years after its release. My only complaint would be that it’s a very long movie (3 hours, 16 minutes), and it becomes increasingly difficult to watch after the slave army is defeated, and Spartacus is subjected to horrible humiliations and tortures. As I asked myself the first time I watched Robin and Marian: do I really want to see this? Highly recommended. 9/10 stars.