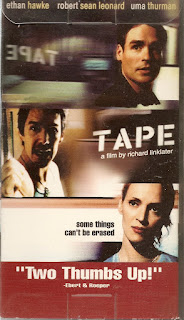 
Blurb From the VHS Jacket: After 10 years apart, three disparate people come together to play out the unresolved drama of their final days in high school. As years of denial slowly peel away, each is provoked into revealing their true nature."


What Did I Learn?: If an old buddy mysteriously asks you to verbally recount a time when you might have broken the law, say nothing and leave - he's wired for sound. Oh wait, I think I already learned that from Wall Street and Donnie Brasco.


You Might Like This Movie If: You know that anything you say can be caught on tape.


Really?: 1) See: "What Did I Learn?" Seriously, there's no way Jon would have stuck around for a whole lot of abusive, and incredibly intrusive questioning. 2) I also had a hard time believing Vince and Jon would still be friends, especially considering it's painfully obvious they have nothing in common and can barely stand each other's company. 3) So wait, Amy assures Jon that he didn't rape her a decade earlier, and Jon's response is to insist that he did? Who in their right mind would do that?!


Rating: As a fan of Richard Linklater's work (Waking Life, Dazed and Confused and A Scanner, Darkly are all magnificent films), I had high hopes for Tape. Unfortunately, Linklater really missed the mark when he adapted Stephen Belber's stage play. The characters (especially Ethan Hawke's Vince) are completely unlikeable, and I simply didn't believe the premise of the story, or that any of the characters would behave the way they do (see: "Really?"). I cannot recommend this movie. 3/10 stars.

Would it Work For a Bad Movie Night?: Possibly. Put yourself in Jon's situation, and then take a drink every time you're pretty sure you would simply get up and leave Vince's fleabag hotel room rather than subject yourself to more abuse.