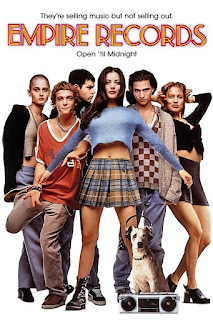 Blurb From the VHS Jacket: “The employees of an independent music store learn about each other as they try anything to stop the store being absorbed by a large chain.” (from imdb.com)

What Did I Learn?: 1) Liv Tyler had some pretty nice legs in 1995. 2) It’s not that easy to commit suicide with a Lady Bic. 3) Harvard is not really near Boston. It’s actually another universe, filled with big blond guys who eat ivy and row boats.

You Might Like This Movie If: You know that corporate-owned music stores have always been lame.
Really?: 1) I had a great deal of trouble believing Joe (Anthony LaPaglia) wouldn’t call the cops on Lucas after he stole, and gambled away the store’s earnings. And wouldn’t he have at least called Lucas’ parents? This is not a minor complaint – it’s the setup for the entire film.

Rating: I realize I’m far too old to “get” Empire Records, but I don’t think I would have enjoyed this film if I had seen it 20 years ago. The script is dopey and clichéd, most of the characters are one, or two-dimensional, and by the end, I really didn’t care. The best parts of Empire Records focus on the adults – world-weary Joe (I liked his exchanges with Lucas), and fed-up Jane (Debi Mazar), for instance – and involve some real acting. 4/10 stars.

Would it Work For a Bad Movie Night?: Absolutely! Take a drink every time the kids spontaneously break into a dance number.