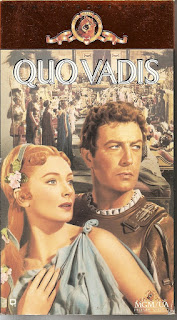 Blurb From the VHS Jacket: “Thundering out of one of the most turbulent epochs of history comes one of the screen’s most spectacular achievements. Deborah Kerr and Robert Taylor head a ‘cast of thousands’ in this majestic epic of passion and power.”

What Did I Learn?: If you're an all-powerful ruler and you really, really want your people to continue loving you, it's a very bad idea to burn them out of their homes in the middle of the night in order to build a shiny new metropolis.


Really?: So, Poppaea's sinister plan to murder Vinicius and Lygia is to pit them in a bloodsport where they have a fighting chance for survival, and it's possible the crowd could demand clemency? Isn't she supposed to be some sort of evil genius?


Rating: Peter Ustinov shines as the evil (and completely insane) Emperor Nero, but in spite of his memorable performance, I couldn't really get into this movie. Quo Vadis is a dated biblical epic that suffers from a largely unlikable protagonist (Vinicius is a real jerk for most of the picture), and some pretty wooden acting from Ustinov's co-stars. 6.5/10 stars.