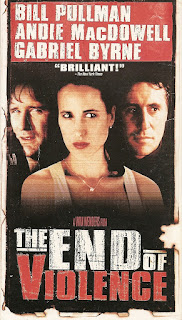 Synopsis: After the first hour, I started referring to this movie as The End of My Fucking Patience.


Blurb From the VHS Jacket: "Someone is watching the crime-ridden streets of Los Angeles. Suddenly, nothing is private, nothing is secret and no one can hide. Is this the end of violence.... or just the beginning?"


What Did I Learn?: If you're going to make a thriller, it's a really good idea to make it fast-moving, tightly-plotted, and told from the perspective of a likeable (or at least relateable) protagonist. Think Foul Play, or The Long Good Friday, or North by Northwest, not Paris, Texas!


You Might Like This Movie If: You know that the end of violence means the end of entertainment.


Really?: 1) So, who exactly kidnapped Mike Max, and who rescued him? If it was the government, why did they use a couple of incompetent assassins, and why would Mike's wife hold him at gunpoint when he visits their house? If it was Mike's wife, doesn't that really undercut the whole government conspiracy angle? 2) Mike leaves the scene of the crime, and yet the cops somehow know he was kidnapped and got away from his captors? What? 3), Um, what was the point of the barroom brawl, or any of that awful, pretentious poetry?


Rating: I really wanted to like The End of Violence; Wim Wenders' Paris, Texas is a legitimate masterpiece, and it's hard to go wrong with a cast that includes Bill Pullman, Andie MacDowell and one of my favourites, Gabriel Byrne. Oh, but The End of Violence goes very, very wrong. For starters, it's a suspense-thriller that moves at a snail's pace; there's a lot of great cinematography, but very little character or plot development. Moreover, Wenders tries to make a number of points about the right to privacy, movie violence begetting real violence, etc..., yet they simply get lost in the shuffle of a slow-moving, badly-written, and incoherent mess. I cannot recommend this movie. 3/10 stars.

Would it Work For a Bad Movie Night?: No, but take a drink every time you find yourself asking: "why am I watching this?"