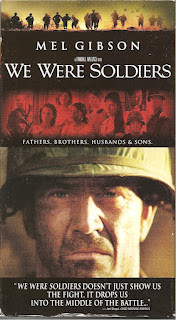 
Synopsis: Mel Gibson affects southern drawl and demonstrates he’s more crazy-dangerous than the Viet Cong, the NVA and all them commie bastards put together!


Blurb From the VHS Jacket: “Mel Gibson and Randall Wallace, the star and writer of Braveheart, reunite for this action-packed war movie that features explosive battle sequences, thrilling aerial photography and unforgettable military heroes who fought for their country, their loved ones and their freedom.”


What Did I Learn?: 1) Custer was a pussy. 2) If your wife just had a baby, don’t go to Vietnam with Mel Gibson...just don’t. 3) When your men are outnumbered and completely surrounded by the enemy, your best course of action is to...um...charge right ahead?!


You Might Like This Movie If: You know that Mel Gibson has an amazing command of the English language.


Really?: 1) It’s amazing how Colonel Moore (Gibson) and Sgt.-Major Plumley (Sam Elliott) can walk around the battlefield, completely upright, and neither man receives so much as a scratch. 2) So wait, Moore spends nearly a year in ‘Nam before he comes home – unannounced in a taxi cab – and rings his own doorbell? Come on...


Rating: We Were Soldiers is far more akin to Saving Private Ryan or The Thin Red Line than any of the other Vietnam war movies I have reviewed; it isn’t blatant propaganda in the mold of John Wayne’s The Green Berets (which I would love to review at some point), but it is quietly patriotic, and infused with the “I fight for my brothers in arms” message of late-1990s/2000s war movies  - it’s tough to imagine a movie like this ever could have been made in the 1970s or 1980s. We Were Soldiers is an entertaining (albeit gory, and sometimes depressing) film, although it never shows the dark side of America’s involvement in Vietnam, or delves into the reasons for why it couldn’t win. 7.5/10 stars.