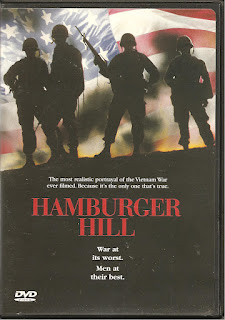 
Synopsis: American GIs have about as much luck ascending a muddy incline as Jack and Jill.


What Did I Learn?: It’s best not to discuss geopolitics or race relations when your squad is visiting the local brothel and everyone’s drunk.


You Might Like This Movie If: You misread the title and figure it’s two hours of recipes for this.


Really?: Did anyone on the production team actually listen to the terrible musical score that Philip Glass provided? While Glass' style was wonderful and totally appropriate for Koyaanisqatsi and its sequels, it’s out of place and annoying in this film – I have to deduct a half point just for that.


Rating: Hamburger Hill is a very realistic portrayal of nine days in the lives of 14 US Army soldiers during one of the bloodiest battles of the Vietnam War. Some veterans believe it’s an even better, and more true-to-life film than Platoon. That said, I think Platoon is slightly superior because there’s a bit more of a story (i.e. young volunteer must take sides between two sergeants who hate each other); Hamburger Hill is basically a look at these 14 men interacting with each other under extreme pressure, and yes – many of them die horribly. 7.5/10 stars.