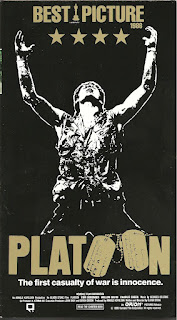 
Synopsis: Charlie Sheen smokes a lot of dope, shoots his sergeant, and somehow makes it through ‘Nam... WINNING!


Blurb From the VHS Jacket: “Seen through the eyes of college drop-out, Chris Taylor (Charlie Sheen), the wars is a real nightmare – a private hell of fears from outside and in – with enemies on both sides of the line.”


What Did I Learn?:  Apparently, if you keep your pecker hard and your powder dry, the world will turn.


You Might Like This Movie If: You miss the days when Charlie Sheen only pretended to be troubled and angry.


Really?: So wait, Sgt. Elias (Willem Dafoe) asks the Commanding Officer to court-martial Sgt. Barnes and Lt. Wolfe, and he nonetheless orders them to work together on a mission? I realize the guy is short-handed and needs every able-bodied soldier, but would a C.O. do that? Couldn’t he have at least put them on opposite ends of the battlefield, or something?


Rating: Platoon is a highly believable and engaging portrayal of the fatigue, constant stress, and sheer terror faced by American soldiers in Vietnam. Platoon won an Oscar for Best Picture in 1986, and while it is an excellent movie, it’s not a fun two hours. Certain scenes are very difficult to watch, especially the near-massacre of the farming village, as well as more than a few battle deaths. Oliver Stone could have used a bit more subtlety, and been a bit kinder to his audience, but he obviously wanted to show the full horror of war. 9/10 stars.