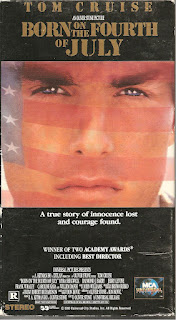 
Synopsis: Tom Cruise passionately convinces a new generation of Americans that patriotism is for chumps.


What Did I Learn?: The words: “it’s the Fourth of July, and I believe in America” are guaranteed applause-getters at an Independence Day picnic.


You Might Like This Movie If: You love watching Tom Cruise get excited about something. (Yes, it’s that clip)


Really?: It seems a bit strange to me that delegates to the 1972 GOP convention would spit on Kovic, considering the whole thing was televised, and guess what – according to imdb.com, the incident didn’t happen the way it was portrayed. For that matter, neither did the protest in Syracuse, New York – the riot police didn’t swarm anyone or crack Kovic on the head. Once again, Oliver Stone plays fast and loose with the truth in order to sensationalize a scene.


Rating: The second film in Oliver Stone’s Vietnam trilogy, Born on the Fourth of July earned rave reviews from critics, but I can’t get on the bandwagon. At two hours and 25 minutes, it’s too long, there are far too many scenes of Tom Cruise overacting (or worse – singing -  *shudder*), and the dialogue often seems hokey, clichéd, and obvious – I half-expected to see an apple pie in the late-1950s/early 1960s "we were innocent" Americana moments. 6.5/10 stars.