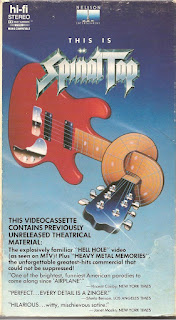 My apologies – I WAS going to review Back to the Future, Part III, but soon discovered the VHS tape is broken. It may take awhile, but I will review that movie - along with Crocodile Dundee II, and Crocodile Dundee in Los Angeles - once I obtain new copies.


Synopsis: The ad-libbing goes to 11.


Blurb From the VHS Jacket: “You’ll never be able to watch a rock group seriously again after experiencing this hilarious comedy about a supposed heavy-metal band called Spinal Tap. Once upon a time they had a pretty big hit song. Now, nearly two decades later, Spinal Tap still clings to some glint of their lost glory as they embark on an accident-plagued tour across America.”


What Did I Learn?: 1) Boston is NOT a big college town. 2) Wow...Fran Drescher was annoying even before The Nanny.  3) Nobody at a puppet show/rock concert wants to hear a free-form jazz exploration.


You Might Like This Movie If: You respect a band that puts its music first, and would never, ever sell out.


Really?: 1) I had a bit of trouble believing the band would agree to this tour in the first place, considering they’re getting booked into 1,200-1,500 seat arenas instead of 10,000-15,000 seat venues, and more trouble believing they would press on after so many cancellations. But come on – an Air Force base dance, or second-billing at a puppet show? 2) I realize everything changed after 9/11, but did airport security ever have a sense of humour about harmless pranks?


Rating: There are many similarities between This is Spinal Tap and Hard Core Logo, except that it features clueless Brit rockers instead of obnoxious Canadian punks and it’s a whole lot funnier. I can’t say this film is well-written, considering nearly all of the dialogue is improvised, but it is clever, well-acted, and a most enjoyable spoof of the 1980s heavy metal scene. Highly recommended. 10/10 stars.