Secrets of the Back to the Future Trilogy (1990) 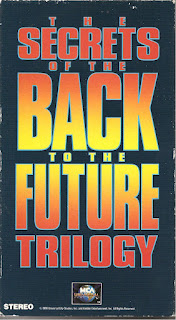 
Blurb From the VHS Jacket: “Join host Kirk Cameron as he answers fans’ most asked questions about the Back To The Future trilogy. With a combination of cleverly-edited clips, never-before-seen footage, interviews with star Michael J. Fox, and director Robert Zemekis, Christopher Lloyd, and Mary Steenburgen, the most closely-guarded secrets of the series are revealed.” [The VHS Jacket actually mis-spells “Zemeckis”...wow, somebody was in a rush to get this out the door!]


What Did I Learn?: The Back to the Future trilogy doesn’t have any good secrets.


You Might Like This Movie If: You know that Kirk Cameron possesses a masterful knowledge of history, and he’s just the guy to discuss the intricacies of time travel.


Really?: I still can’t believe I paid $2 at Value Village for a 21-minute video featuring Kirk-Fucking-Cameron that was marked “Free” on the VHS jacket. This blog is a priority for me, but I must have been on crack at the time.


Rating: The Secrets of the Back to the Future Trilogy is just plain atrocious. Originally aired on television between the release of Back to the Future Part II and Part III (in order to "sell" the latter film and the now-defunct Universal Studios ride) it was re-packaged as a fourth addition to the Back to the Future box set. The “half hour” special consists of 1980s B-list star Cameron answering phony “Dear Back to the Future” letters as a set-up to a series of clips from the films. If you enjoyed the Star Trek 25th Anniversary Special, you’re going to love this turd. 2/10 stars.