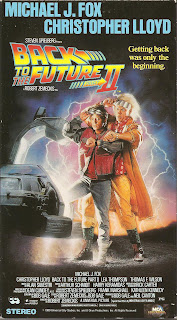 
What Did I Learn?: Apparently, we’re just three years away from flying cars, a lightning-fast justice system without lawyers, and re-hydrated pizza.


Really?: 1) How does old Biff know how to use the time machine? And gee – what are the odds of him going back to the same date in 1955 as the first movie? 2) They still use faxes in 2015? 3) Why didn’t 2015 suddenly change after old Biff returned from his trip to 1955? 4) So wait...why in the world would Doc Brown recruit Marty (and his girlfriend) to straighten out a problem thirty years in the future if he’s all about not upsetting the space-time continuum, or whatever? Couldn’t he have simply *told* Marty about what could happen, and let him deal with it, decades later? 5) Funny how none of that “chicken” stuff was ever mentioned in the first film...


Rating: Back to the Future Part II always struck me as a fun-but-unnecessary sequel. It’s well-made, and certainly entertaining, but while the first film dealt with people and relationships (all-American 1980s teenager gets to meet and interact with his parents as teens, 30 years earlier) this one is all technobabble and non-stop action – the viewer never gets a chance to breathe, let alone reflect on anything. 7.5/10 stars.