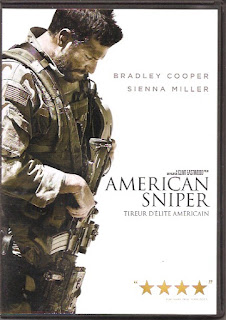 Synopsis: US Marine sniper becomes increasingly detached from reality during violent tour of duty in Iraq…sorry, that’s the Synopsis for Jarhead.
Blurb From the DVD Jacket: “Chris Kyle’s (Bradley Cooper) mission is to protect his brothers in arms while being a prime target of insurgents.”
What Did I Learn?: 1) There are three types of people in the world: sheep, wolves and sheep dogs. 2) The key distinction between Texans and rednecks is that the former ride horses, while the latter ride their cousins. 3) You can only circle the flames so long. 4) Iraqi dirt tastes like dog shit.
You Might Like This Movie If: You always wondered why some men grow up to become snipers.
Really?: So, does Chris (Bradley Cooper) have an opinion on the Iraq war? Ok, he’s a “sheepdog”, and he sees his role as killing bad people, and I’m sure he killed some legitimately evil people, but it’s strange how he doesn’t really his own PTSD, and never once questions the wisdom of invading Iraq or asks if the larger goals were worth the lives of so many of his colleagues.
Rating: Directed by Clint Eastwood, American Sniper provides a compelling, but very limited look at the life of a young man with a strong sense of mission. The film works best when Chris Kyle is in Iraq and on the trail of a rival Iraqi sniper, and it gets awkward when he’s back in Texas and uncommunicative towards his long-suffering wife. It’s a good film that could have been better with a bit more analysis of the larger picture. 7.5/10 stars.