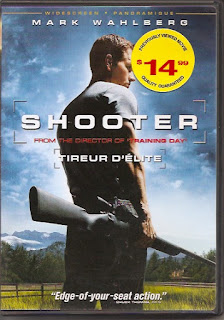 Synopsis: Deep State fucks with the wrooooooooooong guy. [Come to think of it, that sounds a bit like the Synopsis for The Domino Principle]
Blurb From the DVD Jacket: “Get ready for edge-of-your-seat thrills as Mark Wahlberg ignites the screen in his most compelling role yet: the Shooter.” [Yes, this sucker once retailed for the low, low price of only $14.99]
What Did I Learn?: 1) Tennessee is the patron state of “shootin’ stuff.” 2) “There are no sides. There’s no Sunnis and Shiites. There’s not Democrats and Republicans. There’s only HAVES and Have NOTS.” (Wait - didn’t Ned Beatty deliver some eerily similar words in Network?) 3) Nothing, no matter how horrible, ever really happens without the approval of the government. 4) The hassle with democracy is there’s always some confused soul who believes one man can make a difference and you have to kill him to convince him otherwise.
You Might Like This Movie If: You know that shooters are nothing but trouble.
Really?: 1) I realize Bob Lee Swagger (Wahlberg) is an ex-military guy in top physical shape, but I had a bit of trouble believing he could have accomplished even a fraction of what he did with a bleeding bullet wound. 2) Hold on - Swagger and his partner are actually betrayed by their own government during a top-secret mission in Ethiopia, and the Deep State goons seriously think he’ll agree to work with them again? 3) So, the goons capture FBI dude Nick Memphis, beat the crap out of him, and then attempt to finesse his murder so it looks like a suicide? 4) Gee, aren’t there any easier ways of icing the archbishop than waiting for him to make a speech when he's standing next to the President of the United States?
Rating: Shooter is an enjoyable, if somewhat predictable, unoriginal and highly contrived thriller (See: “Synopsis,” “What Did I Learn?” And “Really?”). Strangely, the film tries to present itself as edgy and political, but it’s really just a big shoot-em-up. 6.5/10 stars.