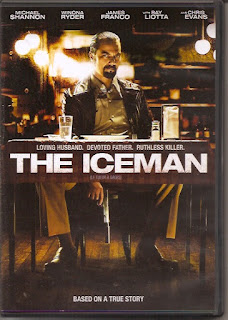 This would have been great for my tribute to gangster movies in 2011
Synopsis: Violent psychopath ices (literally!) other bad people. And we’re expected to give a shit.
Blurb From the DVD Jacket: “Loving husband. Devoted father. Ruthless killer.”
What Did I Learn?: If you’re ever tempted to kill somebody, throw the corpse into a freezer for a few months before giving it the old dumperoo – the Medical Examiner will have no idea when the time or date of death took place. 2) John Ventimiglia (best remembered as Artie Bucco from The Sopranos) is a shitty dancer.
You Might Like This Movie If: You assume it's a prediction of the future, based upon the title.
Really?: I realize The Iceman was based upon a true story, but I had a bit of trouble believing Bob “Mr. Freezy” Pronge (Chris Evans) would accept Richard (Michael Shannon) as a literal partner-in-crime after the latter fired a pistol at point-blank range in his face and threatened his life. 2) So, the New York mob hires Richard to do a hit, and then refuses to pay him? Hey, that’s a great idea.
Rating: I have to give The Iceman a bit of a mixed review; Michael Shannon delivers a convincing performance at Richard Kuklinski, and he shares a number of great scenes with Winona Ryder as his strangely-oblivious wife and Ray Liota. Set mostly in the 1960s and 1970s, the film is noteworthy for its attention to period authenticity. Kuklinski’s story is certainly compelling, but The Iceman doesn’t really work as a biopic – there’s no noticeable narrative, and the audience isn’t given much insight into why he turned into a monster, aside from surviving childhood abuse. 6.5/10 stars.