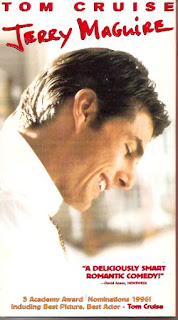 Synopsis: Show me the overacting!
Blurb From the VHS Jacket: “But with the help of one loyal colleague and one outrageous client, JERRY MAGUIRE learns that loving well is the best revenge.”
What Did I Learn?: The human head weighs eight pounds. 3) Kwan means love, respect, community and dollars. 4) A real man wouldn’t shoplift the pootie from a single mom. 5) We live in a cynical world.
You Might Like This Movie If: You know that Tom Cruise is just the guy to play a beloved Everyman.
Really?: 1) So, wait – Jerry gets fired, and he’s somehow allowed to stay in his office for a good length of time in order to call his clients and ask them to leave the company? Wouldn’t he most likely get barred at the door, or escorted out by security guards?  2) How many times a week does that divorced women’s group meet, and why are they always camped out in Anne-Louise’s living room? 3) Let’s see…. There’s the hockey player who’s had several concussions and his son is really worried about him…. Rod’s brother, who is obviously jealous of Rod’s success…. Jerry’s ex, Avery, who is probably insane…. The nanny who loves jazz music… just how many minor characters and subplots does this movie introduce and then fail to develop? 4) Do Dicky Fox’s short monologues really add anything? They’re not particularly funny, and they don’t provide any insights into the strange world of professional sports agency.
Rating: Jerry Maguire is a nice romantic comedy that could have been better with some recasting and a tighter script (see: #3 of “Really”). The film delivers a number of great lines and some genuinely funny scenes, and I was particularly impressed by Rene Zellweger and Cuba Gooding Jr; the latter somehow manages to make Rod obnoxious, yet still strangely likeable, which is no easy feat. The biggest problem I have with Jerry Maguire (aside from a number of unnecessary scenes that pad out the running time to two hours and nineteen minutes!) Is Cruise himself - he wildly overacts in nearly every scene (see: “Synopsis”) and doesn’t seem to understand that sometimes less is more. 7.5/10 stars.