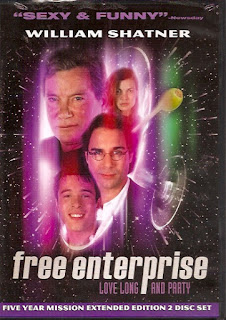 Synopsis: Loveable dorks approaching the big 3-OH make the startling realization that William Shatner is a bit of a whackjob.
Blurb From the DVD Jacket: “FREE ENTERPRISE changed the way fans saw William Shatner and themselves in a performance since called a comic masterpiece.”
What Did I Learn?: It’s not a great idea to wear a Starfleet uniform on your first day of high school.
You Might Like This Movie If: you would gladly accept a promise from William Shatner.
Really?: 1) Apparently, it’s really easy to bang hot model-actress chicks in Hollywood when you’re flat broke, carless and always discussing Star Trek in casual conversation. 2) I realize Mark and Sean consider Robert to be a good friend, but I had a hard time believing they would lend him so much dough knowing he has no means of repaying them, and doesn’t seem all that eager to get his career back on track. 3) Ok, Shatner’s idea of producing, and starring in a musical version of Julius Caesar is pretty wacky, but wouldn’t he have an extensive network of people in the entertainment industry? Why would he humour Mark and Robert when it’s obvious neither of them have any influence?
Rating: Free Enterprise is the sort of film I’ve always enjoyed: character-and-dialogue-driven comedy-dramas that provide some insight into the human condition and don’t take themselves too seriously. On the whole, Free Enterprise is an entertaining, often-funny and cleverly-written low-budget film, and Shatner is hilarious when he pokes fun at his action hero image - you also have to like his unique take on Shakespeare. Unfortunately, some of the humour falls flat, Mark and Robert aren’t terribly likeable, and long stretches pass between Shatner’s appearances. 8/10 stars.