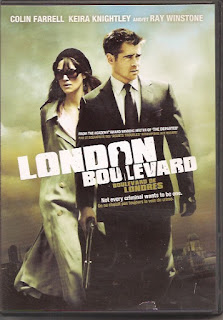 I could have used this for my tribute to British Gangster movies in 2014.
Synopsis: Dangerous dude is released from prison, falls for a woman who’s way out of his league, discovers his best buddy is nothing but trouble, battles powerful crime boss, and gets bumped off by a minor-league scumbag he should have iced weeks earlier. So, it’s basically Carlito’s Way with cockney accents.
Blurb From the DVD Jacket: “Not every criminal wants to be one.”
What Did I Learn?: 1) The most powerful fucking thing is to know what can go wrong…for anybody, at any fucking time. 2) You’re not allowed to do more than one thing. 3) Work’s what you do when you’d rather be doing something else. 4) A woman’s job in a film is to get the hero to talk about himself - about his hopes, his fears, maybe even about his fascinating, fucking childhood.
You Might Like This Movie If: You enjoy cruising along a London boulevard.
Really?: 1) So, Mitchel (Colin Farrell) has an alcoholic sister who’s dating a nice doctor, and his old buddy the homeless guy was recently murdered, there’s some creepy dude stalking his girlfriend, and a disgraced physician wants to pick up some of his belongings from Mitchel’s pad….holy shit, how many underdeveloped characters and subplots does this movie include? 2) Doesn’t Gant (Ray Winstone) have better things to do than harass Mitchel into going to work for him, and then attempting to kill him when he refuses? I didn’t really buy that storyline.
Rating: London Boulevard is a slow-moving and rather ho-hum crime drama that features a number of very good performances (Farrell shares some tense scenes with Ray Winstone, and I was especially impressed by Ben Chaplin as Farrell’s sidekick Billy), but otherwise suffers from cliched, underdeveloped and unoriginal script (see: "Synopsis" and "What Did I Learn?"). 6/10 stars