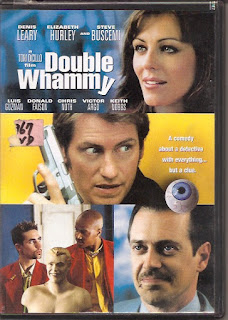 Synopsis: Dennis Leary mugs his way through 93-minute underdeveloped cop comedy that’s basically a pilot for his 2001-2002 series, The Job.
Blurb From the DVD Jacket: “A comedy abut a detective with everything…but a clue.”
What Did I Learn?: If a couple of weird guys who always wear red suits ask you to sit in a chair so they can tie you up in order to discuss torture scenarios for a screenplay, just say “no thanks.” 2) Chiropractic medicine has been recognized by the medical community since 1963. 3) White hipsters don’t react well when they’re accused of harbouring subconscious racist thoughts.
You Might Like This Movie If: You took a look at the DVD case, and you're convinced that Leary, Elizabeth Hurley and Steve Buscemi all guest-starred on Press Your Luck.
Really?: 1) So, Dimitri (Chris Noth in a send-up of his Law and Order role) realizes Maribel must have had some connection to the two killers, and….nothing? There’s no follow-up to this realization aside from Maribel crying at her father’s bedside? 2) Was there any point behind Jerry (Buscemi) telling Ray (Leary) that he recently checked out his ass? This revelation is mentioned, and never developed further.
Rating: For a film that features Leary, Buscemi and Hurley, Double Whammy often looks and feels like a low-budget straight-to-video cop comedy. The script is wildly uneven, and loaded with undeveloped storylines and characters (See: “Really”), but I liked the chemistry between Leary and Hurley and Double Whammy isn’t bad for an evening’s entertainment. 6/10 stars.