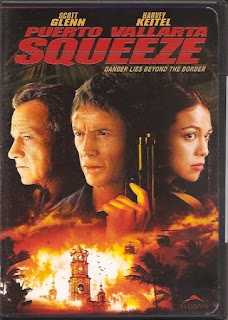 Synopsis: Professional killer befriends bickering couple….no, that’s the Synopsis for The Matador. Um…  Run-of-the-mill road trip turns into harrowing adventure… no, that’s National Lampoon’s Vacation. Um…  Tough guy steals wormy dude’s girlfriend during trip to Mexico…no, that’s Against All Odds.
Blurb From the DVD Jacket: "Danger lies beyond the border."
What Did I Learn?: You can apparently purchase a caged ocelot in rural Mexico for the princely sum of $3000.
You Might Like This Movie If: you assume it's a tutorial for making top-quality margaritas.
Really?: 1) So, Scott Glenn and Harvey Keitel get top billing in this film (even though Craig Wasson’s Danny is arguably the protagonist, but never mind that), and they don’t share a single scene together – just a phone call? 2) I realize Danny is bummed out about losing Maria, but isn’t he basically on the verge of getting evicted from his fleabag apartment? Why would he blow his entire wad of cash to free a caged wild cat? 3) Speaking of Danny, does anyone else think the film takes a wildly wrong turn at the mid-point when he loses about 80 IQ points and starts doing inexplicably dumb things like yell at Clayton in a crowded restaurant or speed down a Mexican road in a car filled with dead bodies? I was expecting him to man up, realize he loves Maria and get his shit together. 4) I had a bit of trouble believing the entire premise of the film… Danny thinks it might have been Clayton who shot those men in cold blood, but he agrees to drive him to the border anyway? And it’s nice that Clayton decides to let Danny and Maria live, but does he really need their car for his escape? If so, couldn’t he have stolen it without much effort?
Rating: Puerto Vallarta Squeeze is a somewhat-enjoyable thriller that suffers from some major credibility issues (see: “Really?). I can’t quite declare it to be a bad movie, but it comes perilously close. 5.5/10 stars.