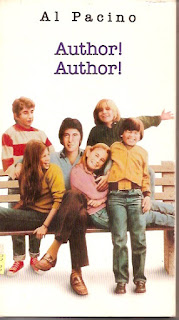 I could have used this for my tribute to Al Pacino in 2012.
Synopsis: Awful! Awful!
Blurb From the VHS Jacket: "When Al Pacino takes on Broadway, his kids take over his life."
What Did I Learn?: Larry Kotzwinkle’s not a man, he’s a duck.
You Might Like This Movie If: You know the best strategy for writing a successful play is to become totally wrapped up in your personal problems and continually blow off everyone involved in its production.
Really?: 1) A few questions: what’s Ivan’s play all about, what’s the problem with the second act, and how did he fix it? I think the viewing audience deserves some answers. 2) Funny how Ivan is a playwright and Gloria is an ESL teacher – they’re New York intellectuals – and lots of other intellectuals like Norman Mailer are name-dropped repeatedly, yet nobody ever discusses literature, the arts or ideas. 3) So, big events in the Travalian household by making a big cake and throwing it at Ivan?! WTF? 4) Hold on, a couple of cops order Ivan to hand over his runaway stepdaughters, and he responds by running away with them and barricading themselves on the roof? I’m shocked he wasn’t charged with obstruction of justice, at the very least. 5) Hey, what happened to Ivan’s curly new haircut?
Rating: Hoo-wee, Author! Author! is a bad film. I was expecting a light, character-driven drama with some comedic elements, but wound up watching Pacino behave like a loud New York version of Mr. Rogers with a bunch of precocious brats. Author! Author! veers uneasily from slapstick humour to Kramer vs. Kramer-style relationship drama – some of it works (I liked the scene near the end when Ivan tells off his selfish wife for abandoning a string of husbands and her kids), but much of it doesn’t. I can’t recommend this movie. 4/10 stars.
Would it Work for a Bad Movie Night?: No, but take a drink any time Ivan, Morris (Bob Dishy) or Kreplich (Alan King) shout unnecessarily.