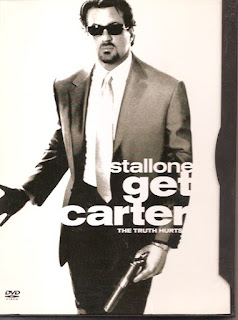 This would have been perfect for my tribute to revenge-themed movies.

Synopsis: Formulaic re-make of a Michael Caine classic…oh, sorry, that’s the Synopsis for The Italian Job. Um…. Cynical tough-guy visits strange town to investigate death of somebody close….no, that’s Beverly Hills Cop. Um….Stallone sleepwalks his way through less-than-inspired revenge thriller….no, that’s Avenging Angelo.
Blurb From the DVD Jacket: “The truth hurts.”
What Did I Learn?: 1) Revenge doesn’t work. 2) If you don’t take care of business, the business will take care of you. 3) Nobody likes the list guy.
You Might Like This Movie If: You're really out to get Carter.
Really?: 1) Holy shit, aren’t there any cops in Seattle? Carter beats Cyrus (Mickey Rourke) to death in front of several dozen witnesses, gets into at least two extreme car chases, and sneaks into a crime scene, and we never so much as see a squad car. 2) So, Carter’s mob employer in Vegas can’t spare him for even a few days? The original provided a convincing reason for Carter’s (Caine) strained relationship with his boss, but this one seems a bit contrived.
Rating: Get Carter is a surprisingly dull reboot of the far-superior original film with the same title (which I'm aiming to review in 2019 if I can obtain a copy). I wanted to like the reboot, but it’s extremely slow-moving, and Stallone doesn’t give us many reasons to give a crap about his character. I can’t recommend this movie. 4/10 stars.
Would it Work for a Bad Movie Night?: Maybe - take a drink any time you find yourself asking: “where are the police?”