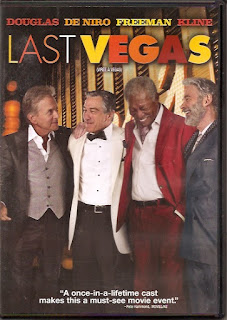 I could have used this for my De Niro tribute!
Synopsis: Michael Douglas portrays a self-made wealthy older bastard who has grown estranged…oh, sorry that’s the Synopsis for Wall Street: Money Never Sleeps. Ok, Robert De Niro is a tough, violent bastard who takes Las Vegas by storm….no, that’s Casino. Um… Morgan Freeman plays a kindly old gent who recovers from a personal illness and walks away from his smothering family to have some fun….no, that’s The Bucket List. Um…. Kevin Kline is a loveable New Yorker who loves his wife but really wants to have some fun on the side….no, that’s I Love You to Death. Ok, ok….it’s The Hangover featuring a bunch of old farts.
Blurb From the DVD Jacket: “Starring four legends like you’ve never seen them before, LAST VEGAS tells the story of Billy, Paddy, Archie and Sam.”
What Did I Learn?: De Niro really needs to stop making these fucking comedies.
You Might Like This Movie If: You've always wanted to sit through a 90 minute commercial for the Aria in Las Vegas.
Really?: 1) I REALLY didn’t need to see Paddy (De Niro) receive a lap dance from a dude at the bikini contest. Actually, that entire poolside contest scene was cringe-inducing. 2) Archie’s (Freeman) son Ezra tracks him down in Vegas, shows up for the bachelor party, and….we never see him again.  Did he take an earlier flight home? Funny how he just disappears. 3) I had a bit of trouble believing three 70-something gents would actually want to spend time drinking Red Bulls-and-vodka in an obnoxiously-loud nightclub packed with club kids, let alone wait an hour in line and agree to an $1800-per-bottle service.
Rating: Last Vegas has a great cast, and….that’s about it. Last Vegas isn’t quite a bad movie – I liked some of the exchanges between Kline and Freeman (Mary Steenburgen also acquits herself well as a sultry lounge singer with an odd past) and the script had the potential to be a lot better – but there’s far too much exposition in the dialogue, and I was struck both by how often Last Vegas serves as a travelogue for Sin City, and its spectacularly wrong-headed assumption that vulgar casinos, drug-fueled nightclubs, moronic youth culture, and douchebag materialism are attractive to anyone and everyone. Based on this film, Vegas gives me the creeps – as did that embarrassing bikini contest scene, by the way. 5.5/10 stars.