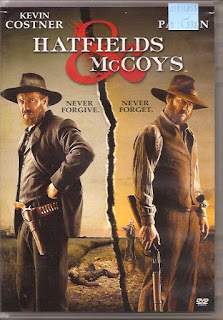 Synopsis: Inbred hillbillies go a-killin’.
Blurb From the DVD Jacket: “Never forgive. Never forget.”
What Did I Learn?: If you wish to defraud somebody using a forged document, it’s not such a hot idea to sign the name of a dude who died two years earlier as the official witness.
You Might Like This Movie If: You know you should never turn your back on a blood-thirsty McCoy.
Really?: 1) I realize Johnse (Matt Barr) isn’t the sharpest tool in the shed, but why in the fuck would he casually mention the location where a couple of his compatriots are hunting to a McCoy family member? (Didn’t he learn anything from a similar slip of the tongue at an earlier point in the feud?) 2) I’m not sure I entirely bought Johnse’s relationship with Roseanne McCoy; I mean, he loves her and clearly doesn’t have the stomach for violence, so not marry her and skedaddle? Couldn’t he make his whisky somewhere else? In real life, he was actually quite a womanizer, so his decision to essentially let her go made more sense. 3) Speaking of real life, the feud ended in part because the State of Kentucky put some pressure on both families. I’m surprised that wasn’t included.
Rating: Hatfields and McCoys is a compelling miniseries with an impressive cast and great production values - it’s hard to believe it was actually filmed in Romania! It’s definitely worth a look even if you aren’t that interested in American history. While I liked Costner’s performance as the Hatfield patriarch, there aren’t many likeable or sympathetic characters in this story (Bill Paxton’s character seems like a bit of a loon), so it’s tough to care about any of them by the end. 7/10 stars.