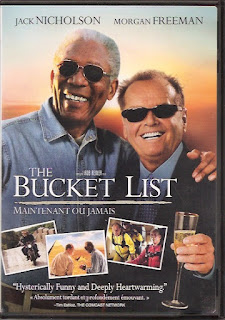 Synopsis: Hilarity ensues when old farts get terminal cancer.
Blurb From the DVD Jacket: “You only live once, so why not go out in style?”
What Did I Learn?: 1) Three things to remember when you get older: never pass up a bathroom, never waste a hard-on, and never trust a fart. 2) You really don’t want to drink Kopi Luwac coffee. 3) We live, we die, and the wheels on the bus go round and round.
You Might Like This Movie If: you're inspired to follow your dreams, take a chance or two, and find the joy in your life.
Really?: 1) My mom suffered from cancer through most of the 1990s. Even when she wasn’t taking chemotherapy, I don’t recall her ever having the stamina to jump out of airplanes or travel the world unaccompanied by medical professionals. 2) Speaking of that world tour, I realize it would have been extremely expensive to send the leads to Paris, Egypt, Hong Kong, and a few other exotic locales, but wow - the film’s blue screen effects are really bad. 3) Hold on - Edward (Nicholson) can’t get a private room in his hospital for PR reasons? Didn’t writer Justin Zackham know that private hospitals rake in boatloads of money by charging patients for luxuries like private rooms and other amenities? 4) Wait, Carter (Freeman) is diagnosed with terminal cancer, and he decides to fuck off around the world with Edward for a month or two? I don’t think a loving husband and father would do that. 5) Gee…I couldn’t help myself from thinking Edward’s long-suffering valet Thomas/Matthew deserved a bit more character development. 6) I can understand Edward and Carter wanting to race stock cars around ring, but actually crashing into each other's cars like professional NASCAR racers? Gee, I dunno....
Rating: I have to give The Bucket List a less-than-stellar review. While I liked both the chemistry between Nicholson and Freeman, and the film’s message about finding the joy in one’s life when you still have the chance to do so, it suffers from some real credibility problems (see: “Really?” and “Synopsis”) and a treacly, cliche-ridden script. 5.5/10 stars.