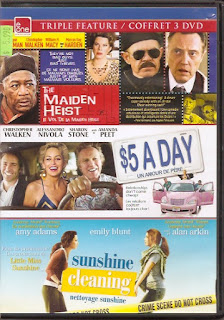 Synopsis: Loveable incompetents attempt to steal priceless artworks from a museum… ok, it’s basically Welcome to Collinwood meets The Score, except that nothing really happens for long stretches.
Blurb From the DVD Jacket: “It was a stroke of genius.”
What Did I Learn?: Apparently, if you wish to convince an airport employee to simply hand over a shipping crate presumably filled with coveted works of art, and you don’t have the necessary paperwork, your best course of action is to allow your wife to nag you in his presence, claim that you will soon miss your flight if he doesn’t comply, and appeal to his sense of pity.
You Might Like This Movie If: You're happy to watch Christopher Walken in anything.
Really?: 1) See: “What Did I Learn?” 2) Wait…. Roger (Walken) knows he needs to work on the night that the artwork gets packed up, his wife arranges it so he doesn’t have to, we expect a conflict of some sort, and….nothing. Did he stand up to her? Did he tell her some sort of pathetic lie?  How did he wind up working that night? I think the audience got cheated out of a scene. 3) Something about the ending rubbed me the wrong way. Roger loses interest in his beloved painting because he rediscovers his sexual attraction to his wife? Was that the only reason he developed an interest in the maiden - he was horny?
Rating: The Maiden Heist reminded me of Tower Heist for a number of reasons besides their similar subject matter: both caper comedies feature impressive casts, but neither really works because of mediocre writing, strange pacing and less-than-inspired performances. Maiden is somewhat funnier than Tower, but it really drags in places, Walken’s milquetoast character really isn’t very interesting (Morgan Freeman also plays against type as a gay security guard), and Marcia Gay Harden is the one who really shines in this film as Roger’s bored wife. 6.5/10 stars.