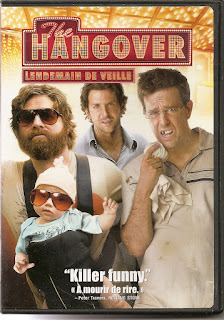 Synopsis: Three guys who would never hang out with each other somehow share implausible bonding adventure.

Blurb From the DVD Jacket: “They planned a Vegas bachelor party they would never forget. Now they really need to remember what exactly went down!”

What Did I Learn?: 1) Julius Caesar did not live in Caesar’s Palace. 2) Memory loss is a side effect from taking roofies. 3) It’s not gambling when you know you’re going to win. 4) Haley’s Comet will next appear in the next 60 years, or something. 5) Indiana Jones wears a satchel. 6) Tigers love pepper and hate cinnamon.

You Might Like This Movie If: You know there's nothing more fun than a good hangover.
Really?: The Hangover isn’t meant to be taken all that seriously, but I have to ask: if the guys ingested “roofies” instead of ecstasy with their drinks, wouldn’t they have probably simply passed out? What are the chances that all four of them could somehow stay awake all night and terrorize Las Vegas?

Rating: The Hangover is an often-sophomoric, and highly contrived film that's a little light on character development, but it is extremely funny from start to finish, and Zach Galfianakis steals the film with his portrayal of the batshit-crazy Alan. If you're in the mood for some lowbrow laughs, The Hangover is a fine choice. 8/10 stars.