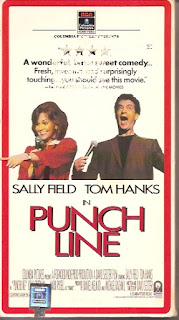 Tom Hanks Quadruple Feature #1 (Please click the links to read my reviews of Saving Private Ryan, The Road to Perdition, Catch Me if You Can, and That Thing You Do)
Synopsis: Bored housewife forms platonic relationship with troubled-yet-brilliant tutor who teaches her how to use the English language more effectively. Oh, wait - that’s the synopsis for Educating Rita! Um… The search for the mysteries of comedy lures good people away from scholarship and loving relationships…no, that’s The Name of the Rose. Um…. Older woman charms frustrated, broke and desperate young man to help her become a star….no, that’s Sunset Boulevard.
Blurb From the VHS Jacket: “Comedy is no laughing matter for Sally Field and Tom Hanks who take centre stage in the smash hit PUNCHLINE.”
What Did I Learn?: 1) Everybody loves housewives. 2) It’s safe to poke fun at debutantes.
You Might Like This Movie If: You know that comedy is tough.
Really?: 1) Hmm… Stephen (Hanks) mentions his larger-than-life, big-game-hunting heart surgeon father on numerous occasions, yet we never get to meet the guy. For that matter, Stephen flunks out of medical school early in the movie, his dad never finds out, and this potential conflict is never resolved. 2) Is it just me, or is nearly all of Stephen’s and Lilah’s (Fields) material really awful? 3) I’m pretty sure a comedy club audience would NOT sit silently if a comedian were to experience an on-stage nervous breakdown, complete with actual sobbing.
Rating: Punchline is a slightly dated, but entertaining film about the late 1980s standup comedy scene in New York City. Hanks and Fields work well together (so well that they returned a few years later to play mother and son in Forrest Gump), and the film features a couple of great moments, such as Stephen doing a Gene Kelly impression, and Lilah (Fields) preparing for an important dinner set to Khachaturian’s Sabre Dance. My only complaint would be that I found it strange that a film which examines a potentially hysterical subject never once made me laugh (see: “Really?”). 7/10 stars.