A Guide to Recognizing Your Saints (2007) 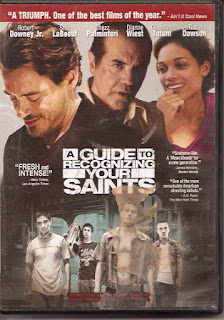 Synopsis: Self-absorbed, narcissistic douchebag returns home after long absence to enrage his hot-tempered father one more time before the old fart croaks.
Blurb From the DVD Jacket: “A coming of age drama about writer/director Dito Montiel’s youth, the film captures the mid-1980s in the toughest neighbourhood of Astoria, Queen’s.”
What Did I Learn?: In the mid-1980s Astoria wasn’t a nice, working-middle class district of New York City at all, but a violent slum with garbage on the streets. Oh, and the local teenagers wore tattered and crappy clothing.
You Might Like This Movie If: You're nostalgic for the *ahem* better days of growing up in the not-so-mean streets of New York City, circa 1986.
Really?: 1) Hold on - Antonio watches his whack job brother accidentally kill himself in a grotesque manner, and all he wants to talk about during the service is exacting revenge against a local hood for an unrelated matter? Sorry, I didn’t buy that scene. 2) See: “What Did I Learn?” 3) I realize Dito had some very real emotional problems that stemmed from his family and social life, but I had a lot of trouble believing it would take him 20 years to return to New York, or that he wouldn’t do a better job of staying in touch with the people who supposedly mean so much to him. Come to think of it, I have to wonder how a teenaged boy with no money and no connections could survive, let alone become a famous writer in California.
Rating: I have to give A Guide to Recognizing Your Saints a rather mixed review. I’ve always liked autobiographical character-driven films, and there are a number of splendid performances in this picture; Diane Wiest is great, and I’ll never forget an emotionally-charged scene between Shia LaBeouf and Chazz Palminteri where young Dito essentially says goodbye to his father. Still, Guide rubbed me the wrong way (see: “Synopsis” and “Really?” of the characters, including Dito, are all that likeable or sympathetic (so I had a hard time caring about any of them), the ending provides very little resolution, and what’s the deal with director Dito Montiel’s distracting and unnecessary use of imagined conversations and subtitles for conversations in English? 6.5/10 stars.