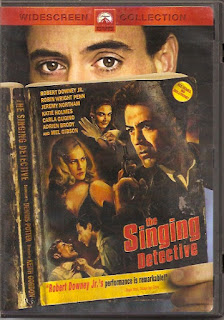 Offbeat Detective Movie #2
Synopsis: Surly, suspicious scribe suffers skin sickness, stuns sympathetic spouse, sees spectral scofflaws.
Blurb From the DVD Jacket: “When it comes to murder, seduction and betrayal, pulp-fiction author Dan Dark (Downey) wrote the book. But now, he’s living it.”
What Did I Learn?: 1) There’s always a dame. 2) Little men shouldn’t sit where their feet don’t touch the ground. 3) When you’re dealing with the Devil, praise the Lord and pass the ammunition.
You Might Like This Movie If: you're in the mood to watch a singing detective.
Really?: I realize Dan is wracked with feelings of guilt, shame a lot of negative emotions related to the murder of his mom years earlier, but what’s the deal with the hallucinations - does he have emotional issues, or is he really nuts? And what do the musical numbers have to do with anything? And who are the imaginary hoods and what are they supposed to represent?
Rating: I have to give The Singing Detective something of a mixed review. Sure, the film is highly creative and stylishly directed, I admired Downey’s tour-de-force performance as a deeply troubled soul with a foul mouth and a vivid imagination, and an unrecognizable Mel Gibson is really quite good as Dan’s sympathetic psychiatrist. Unfortunately, the script is a confusing mess (see: “Really?”) that never makes any sense, and the ending is contrived and silly. Check it out if you wish, but a better bet would be the acclaimed 1980s British mini-series with the same title that served as this movie's inspiration. 6/10 stars.