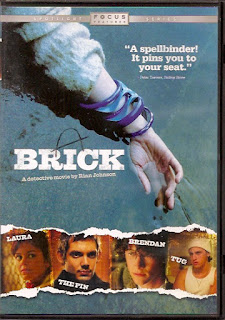 Offbeat Detective Movie #1 (Please click the link to read my review of a somewhat better off-beat detective movie, Gleaming the Cube, featuring a skateboarding Christian Slater)
Synopsis: Do you remember Bugsy Malone, that awful 1970s musical-comedy about 1930s gangsters starring pre-teen actors? Well, just imagine a mish-mash of Bugsy Malone and River’s Edge, and you’ll get a pretty good idea of what this film is all about.
Blurb From the DVD Jacket: “Brendan Frye is a loner, someone who knows all the angles but has chosen to stay on the outside. When the girl he loves turns up dead, he is determined to find the “who” and the “why” and plunges into the dark and dangerous social strata of rich girl Laura, intimidating Tug, drug-addled Dode, seductive Kara, and the ominous Pin.”
What Did I Learn?: 1) Minneapolis has cold winters but a great public transit system. 2) Tolkien’s descriptions of things are really good - he makes you want to be there.
You Might Like This Movie If: You find the title intriguing.
Really?: 1) Wow… these kids are a whole lot more confident and articulate than any of the teenagers I’ve ever met. 2) So, the Pin’s lovely, all-American suburban mom has no idea her son is the biggest drug dealer in the area? 3) For a nerdy-looking “loner,” it’s amazing how Brendan is desired by every hot chick in the high school and able to beat up the boastful ex-football star. 4) Speaking of Brendan’s fighting skills, how many internal injuries does he acquire after serving as the human punching bag? And he’s able to pretty much sleep them off without medical attention? 5) The Pin wears a cape, and everyone uses terms such as “on the nail” and “duck soup.”
Rating: I wanted to like Brick, but there’s something about supposedly hard-boiled California teenagers spouting 1940s gangster slang (see: “Really?”) that rubbed me the wrong way. Sure, Brick is off-beat and an example of creative filmmaking - it deserves a few stars for that - but it’s also pretentious, ridiculously slow-moving, dreadfully dull, devoid of credible or likeable characters, and I didn’t buy any of it. Why set this movie in a contemporary suburban high school when none of the characters act like teenagers? I cannot recommend this movie. 4/10 stars.
Would it Work for a Bad Movie Night?: No, but take a drink any time the dialogue sounds inauthentic. Oh wait, I don’t want to be held responsible for anyone’s alcohol poisoning.