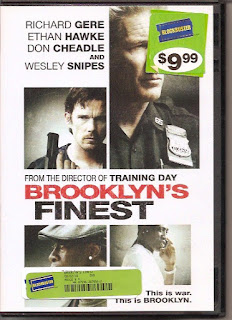 Damn - this movie would have been perfect for my salute to movies about bad cops!
Synopsis: Three deeply-troubled New York City police officers cope with their profound emotional problems by, um….going out on three simultaneous, and independently-planned killing sprees within a few blocks from each other, and whacking a bunch of gang-bangers in cold blood.
Blurb From the DVD Jacket: “This is war. This is BROOKLYN.”
What Did I Learn?: 1) Rudy Giuliani didn’t clean up New York - video games and television did that, because it kept young men indoors. 2) “Fuckin’ freedom ain’t free.”
You Might Like This Movie If: You want to learn about a new way to use taco sauce.
Really?: 1) See: “Synopsis.” Seriously, what are the odds of that happening? 2) Does anyone think Richard Gere was wildly miscast as Eddie, the semi-suicidal, washed-up alcoholic cop on the verge of retirement? I had a bit of trouble believing the only woman in his life would be the hooker-with-a-heart-of-gold he pays for sex. 3) Sal (Ethan Hawke) desperately tries to steal some drug money in order to buy his family a nicer place to live, but gee whiz… don’t NYC cops have a special credit union to help them buy homes? Couldn’t he find something affordable in New Jersey, like that nice little town in Copland?
Rating: Brooklyn’s Finest is a gritty police drama that features a couple of fine performances from Don Cheadle and Hawke. Brooklyn’s Finest isn’t a bad film, but I was expecting a bit more; the three leads share one brief scene together, and their separate storylines never connect, even though they all somehow arrive at the same perceived solution to their problems. 7/10 stars.